It's wildfire season, and we have the tips to safeguard your home

This spring has been one of the warmest -- and driest -- on record. So the potential for a tough wildfire season is very real. 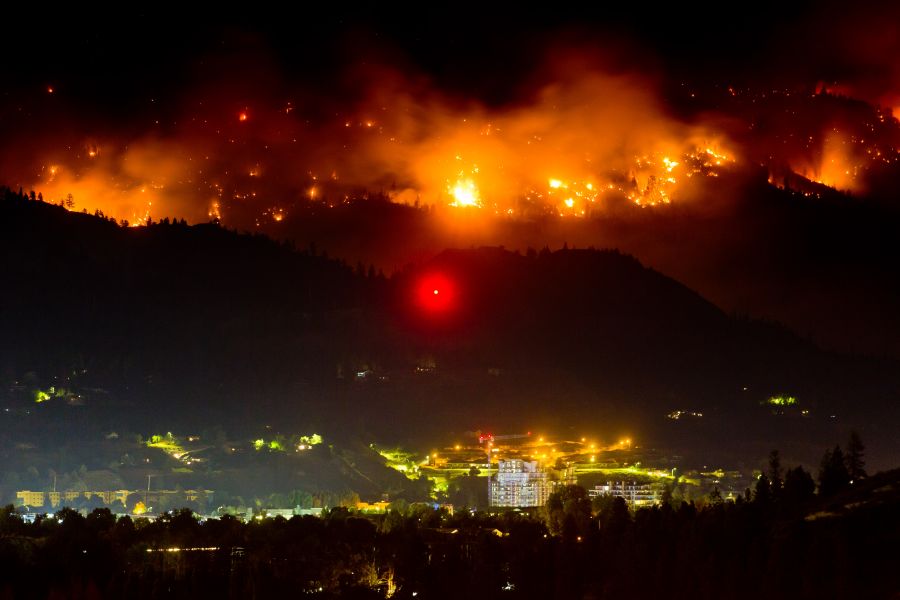 Fortunately, there are plenty of things homeowners can do right now, and as part of a comprehensive plan, to help safeguard their homes and their families.

How do we know this? Because we enlisted the aid of an expert -- the new City of Penticton FireSmart (TM) coordinator, Brittany Seibert. 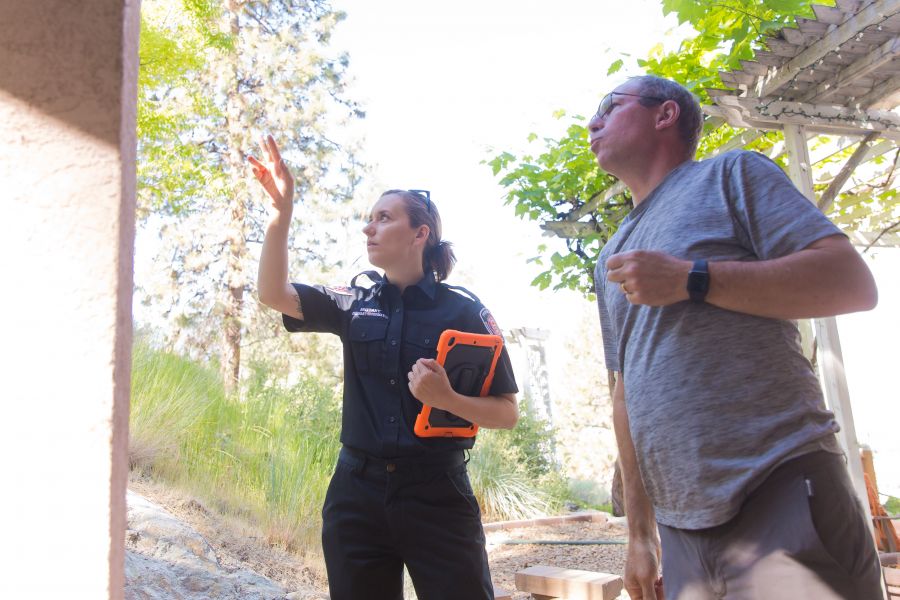 Penticton is fortunate in that it's one of a few areas province-wide to offer freebie home assessments under the new FireSmart "Home Partners" program. And last week we followed Seibert as she conducted one such assessment.

To say it was eye-opening is a huge understatement.

It happened at the home of retired 35-year Penticton firefighter David Spalding. Spalding lives at the edge of the city, where it touches upon the pine forest. In 1994, the massive Garnet fire came with a few dozen meters of several homes in the area.

Spalding arrived more recently, and has since led the drive that's elevated his neighbourhood into one of five recognized FireSmart neighbourhoods in the city. 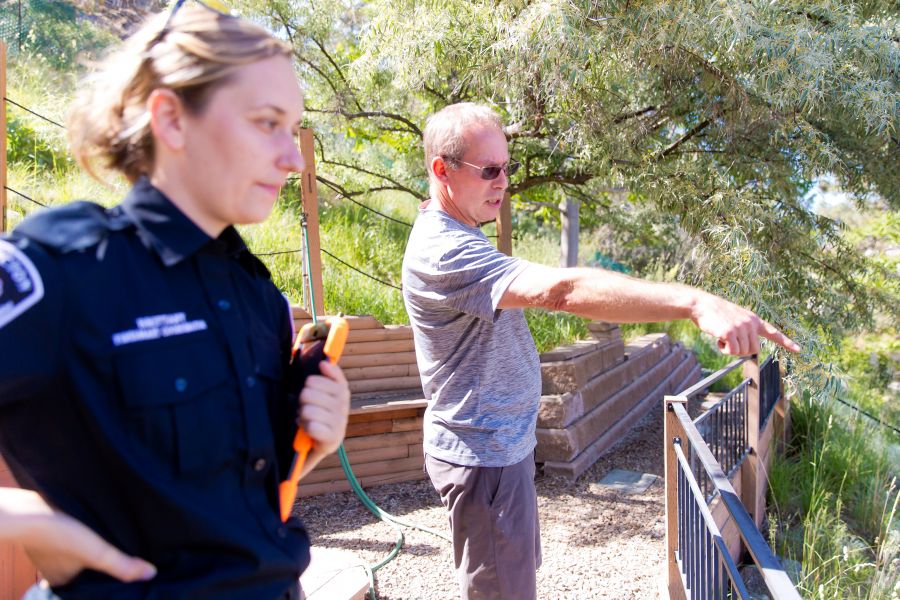 Seibert began the assessment by explaining the all-important "home ignition zones." There are four in all, extending from the exterior walls to a distance of 100 meters.

The most critical is the zone nearest the structure, from zero to 1.5 meters. It's called the "Non-Combustible Zone," and it should contain no combustible materials of any sort. And yes, that includes stuff like bark mulch, woody shrubs, trees, and stored firewood. 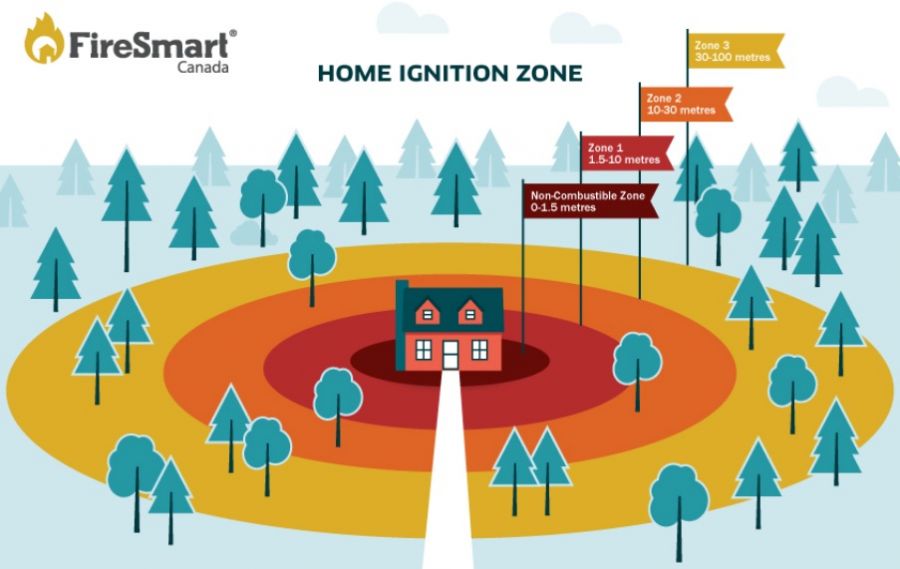 Seibert explained that the goal is to slow a high-intensity blaze to a low-intensity, defendable blaze by the time it nears the home. But then she hit us with something we'd remember all day.

It's all about embers.

"People are often concerned with the forest around or near their homes," she said, "but we're finding that it's the first ten meters surrounding their home that are the most detrimental as to whether it will survive a wildfire.

"Embers can be anywhere from 50 to 90% of the reason homes burn down. So we're really concerned with that ember accumulation." 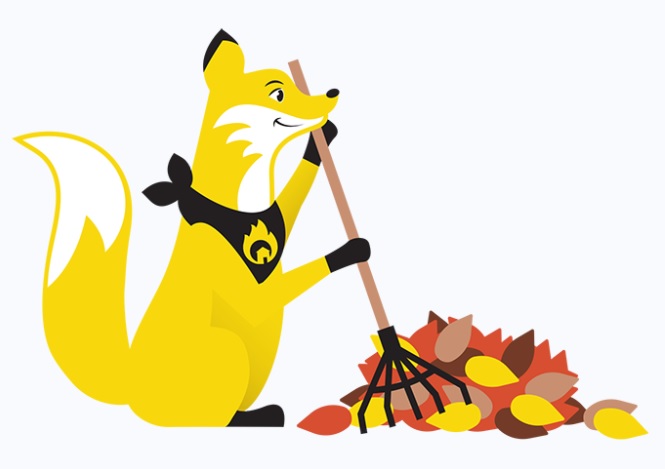 Worse still, airborne embers (known as "firebrands"), buoyed by phenomena such as convection and pushed by winds, have been known to travel as far as two kilometers from their origin.

If they happen to fall on combustible material -- say, a creosote-treated landscape tie adjacent to your house -- it's big trouble. Decorative rocks and pavers are far preferable.

Spalding, as it turns out, has an asphalt roof, which is a-okay when it comes to wildfire. "Asphalt is considered a non-combustible material," said Seibert. "So even if we have embers accumulating on the roof, which is the largest surface area of the home, we find it just doesn't combust."

Clay and metal roofs are good too. Wood is not.

We argued that replacing a wood roof is a pricey proposition, and Seibert said she understands.

"People can often feel overwhelmed with one of these assessments. But our goal is to work with the homeowner to prioritize and make it feel like a more manageable project. Even a few changes will help." 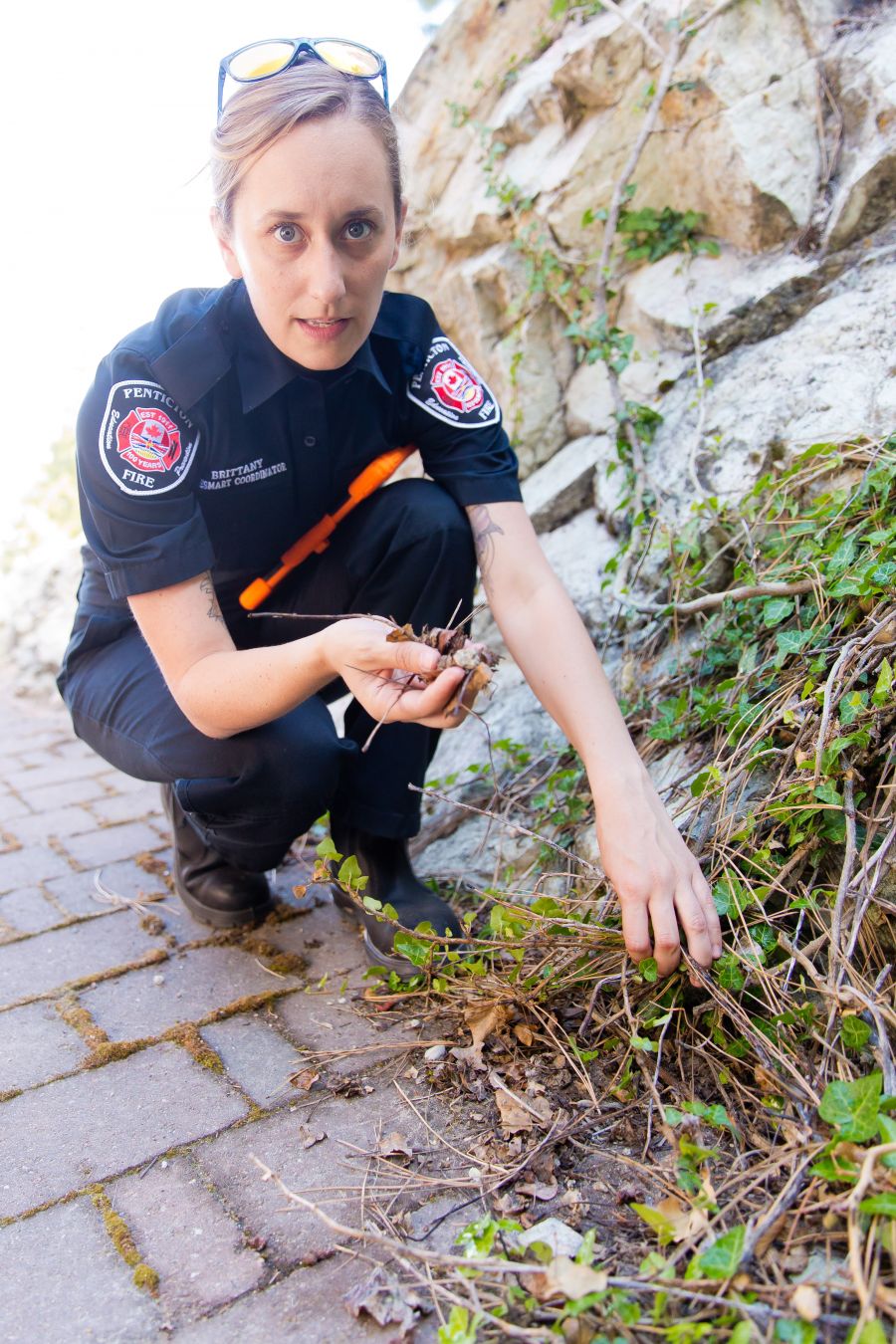 But, she added, those who have a non-combustible roof and have also treated their Non-Combustible Zone and Zone 1 stand a 90% chance of surviving a wildfire. We like those odds.

Beyond that, said Seibert, roofs should always be cleared of debris, and roof vents should be covered by ember-repelling three-millimeter or smaller screening.

From there it was on to the siding. Spalding's is stucco. That’s good. Vinyl is worse, as it melts under radiant heat and exposes the interior, which opens the way for firebrands to waft inside where they do the most damage.

But wood (cedar siding, for example) is worse still, even if thickly painted.

A saving grace is that some wood/vinyl-sided homes are built on concrete foundations. The taller those un-clad concrete walls, the better the defense against fire. 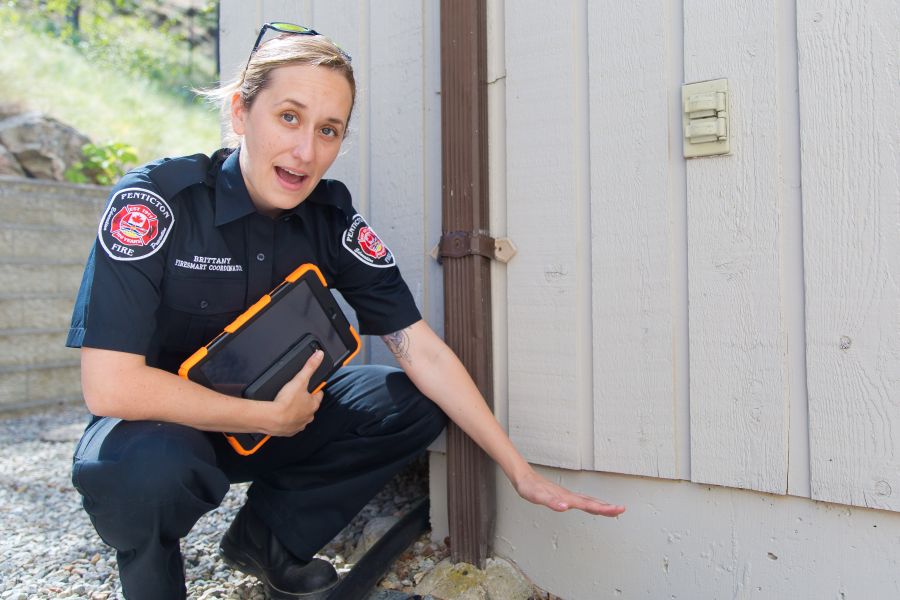 Gutters/downspouts should be non-combustible too, and they should be kept clean. As for eaves, a closed system is best as it prevents embers from snaking upwards into the attic.

When it comes to windows, single-pane pales in comparison to double-paned and tempered glass. The logic being that a single pane will crack quicker, which again opens an entry point for those darned embers.

Doors -- especially garage doors - are another concern. Again, metal beats wood, but the spacing between the door slab and the jamb is also important. Less space, less room for embers to accumulate.

Fortunately, most garage doors can be tightened. And they can be weatherstripped along the tops and sides. For the bottom, Seibert recommends 15-centimeter metal flashing. 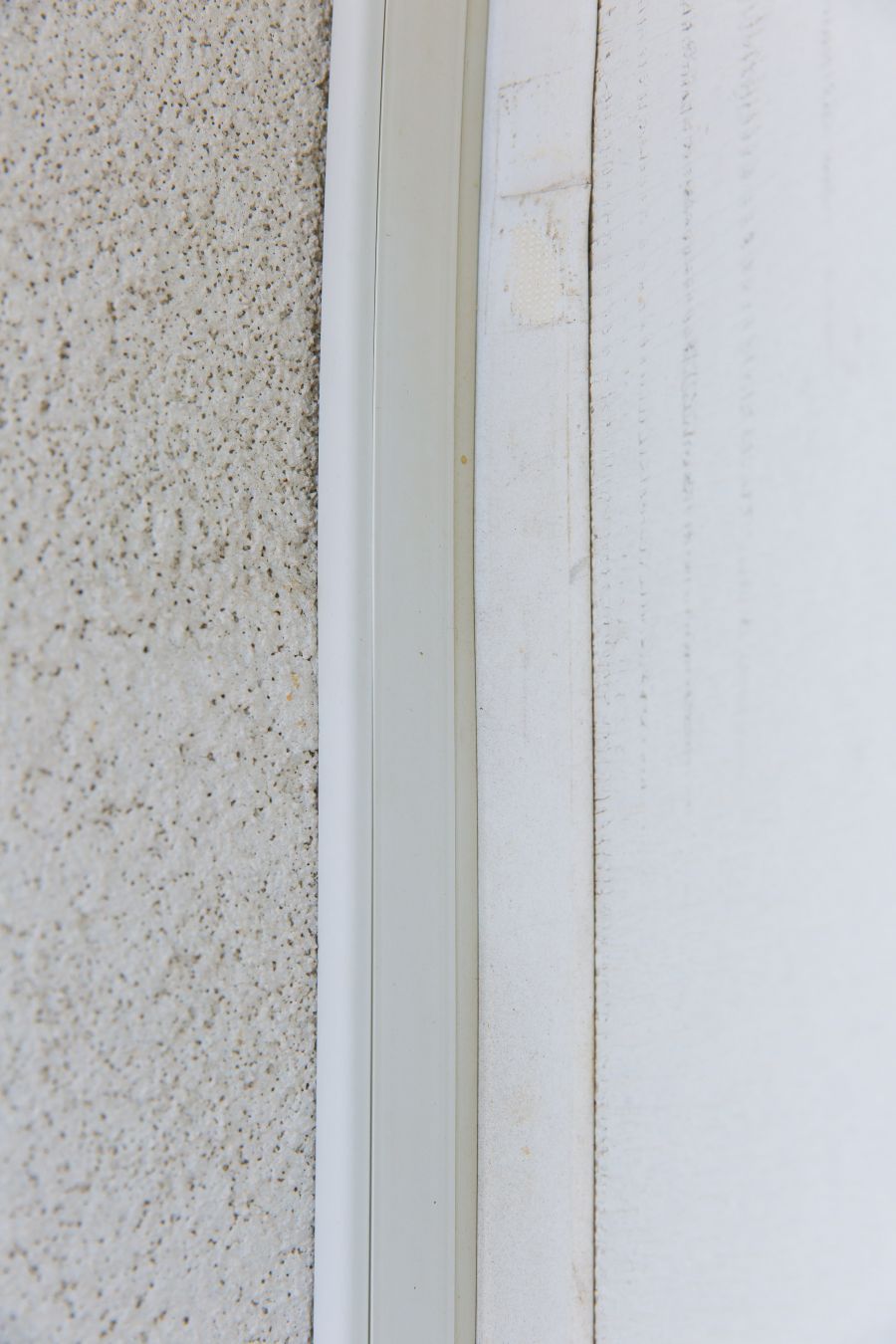 Spalding was ticking a lot of boxes so far, but Seibert now moved to the area beyond his exterior walls.

First up, a wooden trellis -- with a large attached vine -- fixed to the side of Spalding's house. A few feet away, another, even larger vine growing up the wall and under the eaves.

Spalding knew the trellis and the vines were suspect. But because he'd done so well everywhere else (stucco walls, for one), Seibert cut him a little slack. It is, after all, about balance. 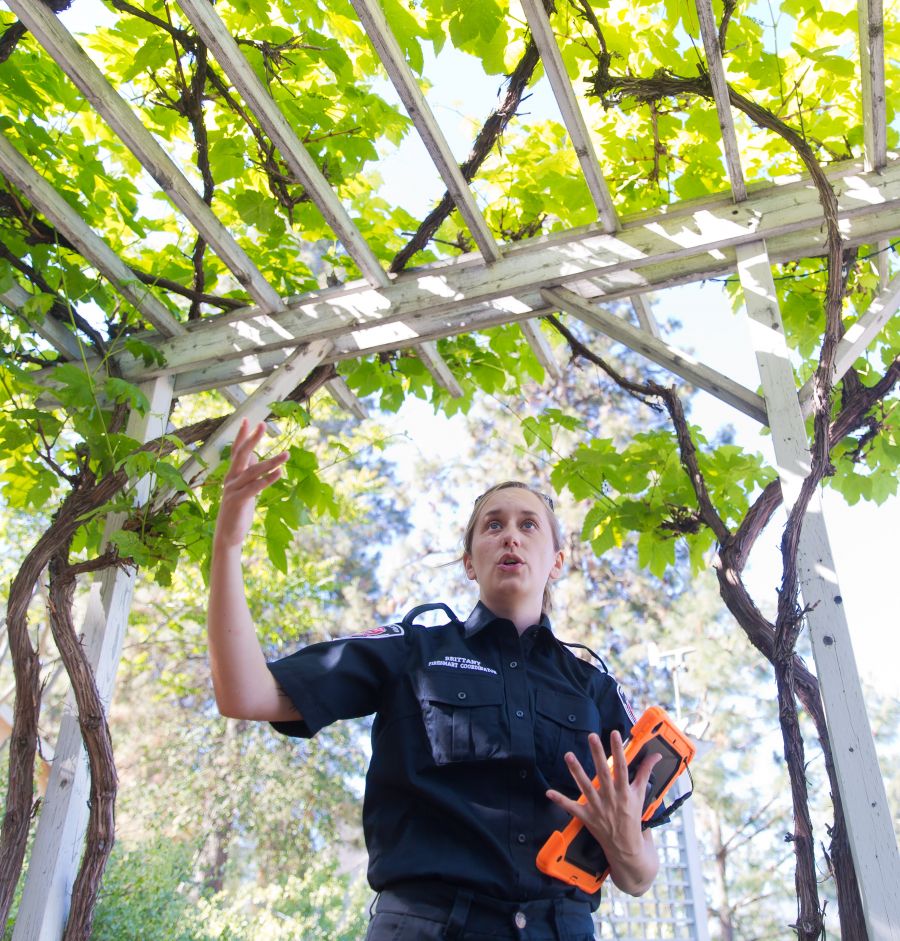 She ultimately said the trellis would act like wick during a fire event, suggesting he replace the 1.5 meters of wooden trellis closest to the home with a non-combustible material.

Then it was on to the decks/patios. Spalding has an assortment of them, some of which are made from bricks and pavers, others that are made of wood.

Seibert liked the former (though she suggested he clean up the ground cover that had grown on top), but not the latter, advising homeowners check the fire rating of decking material when it comes time to renovate, or if possible go with metal or stone.

The area under the deck is equally important. It's another popular spot for embers to accumulate and Seibert said it should be kept clear -- especially of firewood.

"Debris and wood piles under decks are a common reason homes burn down," she explained. As for patio furniture, wood is bad, plastic burns too, and metal is best. Cushions are, of course, highly combustible. Seibert suggests storing the worst of it inside when away from home.

Spalding's landscaping proved to be just as FireSmart as his home. He keeps his grass short (less than ten centimeters), his Non-Combustible Zone (zero to 1.5 meters) generally free of debris, and his garden areas free of easy-burning bark mulch and equivalents.

He also has minimal, sparsely-spaced trees. That they're mostly deciduous is ever better.

"We prefer to see leaf-bearing deciduous trees over needle and cone-bearing conifers," said Seibert. "because they tend not to burn as easily and because they have less ladder fuel (low-hanging branches). "We also worry about conifer surface fuel such as dropped needles. Cedar hedges are especially bad news. They ignite super easily and they collect a ton of dead material in the bush itself."

Those who have conifer trees would do well to knock out dead foliage, rake up the ground underneath, and cut away the lowest two meters of branches. Or better still, get rid of them.

Further out on Spalding's property is an old, smallish shed with an asphalt roof (good), wood siding (not so good), and a base of landscape rock (good).

According to Seibert, a shed should be held to the same standards as a house. But that's not always feasible. Moreover, being in Zone 3 (10 to 30 meters from Spalding's home), this particular shed poses less risk to the main structure than if it were adjacent to it. 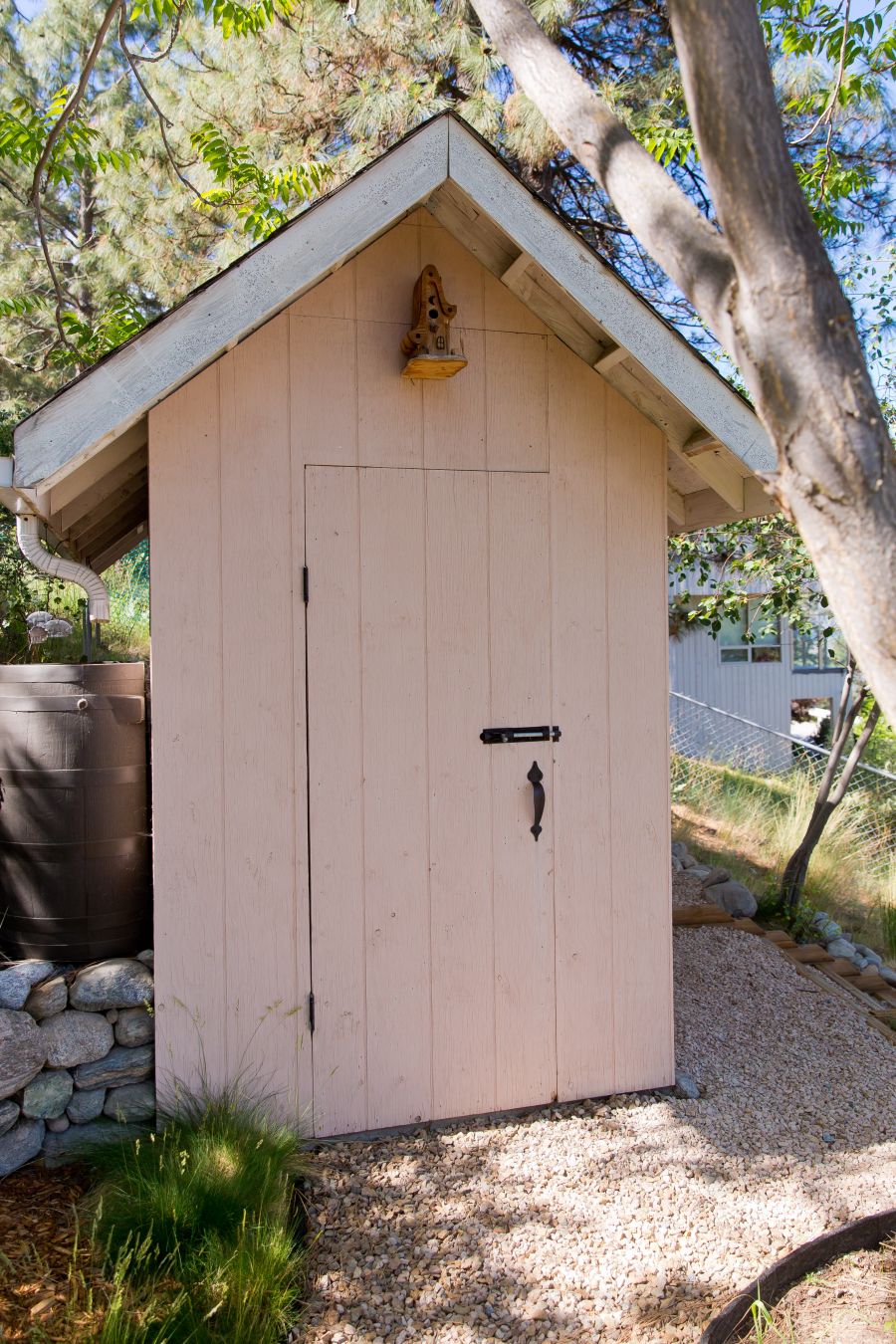 However, it's important to note that some sheds are situated so they're inside Zone 4 or perhaps even Zone 3 of the home next door. And that's just one of many cases where it behooves folks to work together to come up with overarching plans for their entire neighbourhood.

Something else to remember. All homeowners should take inventory of their belongings for insurance purposes -- Seibert says even a quick video would help -- and have an emergency survival kit at the ready and a half-tank of fuel in their vehicle.

If you're a resident of the City of Penticton, you can schedule your own personal, no-charge FireSmart home assessment by going here. You may even qualify for (limited) supplemental mitigation work. 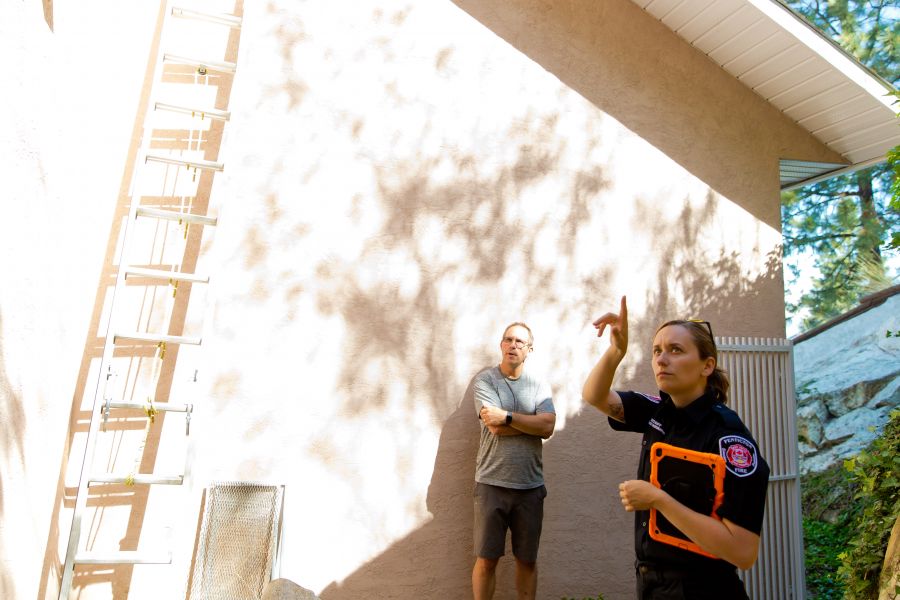 Homeowners in other municipalities/regions can go here to source their LFR (Local FireSmart Representative). Some areas offer free home assessments, all will offer assistance in becoming a FireSmart Recognized Neighbourhood.

And everyone can turn here for more safeguarding information, and here to check out a library of downloadable FireSmart guides, including a nifty brochure that'll help you choose safer vegetation and landscaping.

"The big takeaway," said Seibert, "is to help people understand that the responsibility does not fall only on the responders' shoulders. Private property owners have a responsibility in the wildfire realm too in making their home more defendable and safer.

"Be proactive, not reactive." ** FireSmart, Intelli-feu and other associated Marks are trademarks of the Canadian Interagency Forest Fire Centre